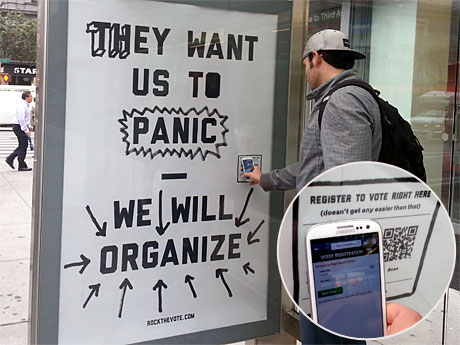 Rock the Vote, an organisation which aims to motivate young people to vote in this year’s US presidential election, is including NFC tags in its out-of-home media campaign.

“With less than 50 days left until election day, Rock the Vote’s ‘We Will’ out-of-home media campaign aims to defy voter suppression efforts in the home stretch,” says the organisation, which has been working for more than twenty years to engage young people in politics.

“Pending or passed legislation in 20 states will make it harder for young people to vote,” it adds. “The ‘We Will’ campaign educates young people about these changes and reminds them of their collective power.”

“We recognized that thought-provoking content, whether static with mobile layering on the street or digital in place-based venues, would invigorate ‘We Will’ in the most perceptible way,” says Heather Smith, president of Rock the Vote.

The NFC functionality is being provided by NFC marketing specialist Blue Bite while the creative has been produced by TaskForce and Apartment One.