Malaysian company DMD Mobile has announced a low cost NFC smartphone for the Malaysian market. The M3 Android NFC Communicator will have keypad and touchscreen versions and both handsets will run Android 2.3 and include NFC capability. 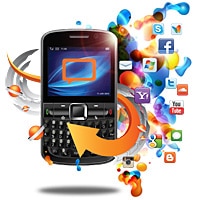 The company is aiming at users who cannot afford the cost of a brand name smartphone by pricing the Communicator at around RM500 (US$165). As an added benefit, RM10 per month will give users unlimited chat and unified SMS and email.

“To be honest, we are not looking at those who already own a BlackBerry or smartphone, but at those who find the typical RM2,000 entry point and RM60 per month data plan as being beyond their means,” DMD Mobile founder and CEO Herve Jegou told The Malaysian Insider. “We are very focused on bringing innovation to the people, and an innovation that is only available to 10% of the people is meaningless,” he added.

Jegou has been involved in the NFC phone business for a number of years and was previously the CEO of NFC phone pioneer Fonelabs. DMD is expected to demonstrate the M3 Communicator at MWC 2012.

• Find out more about the M3 Android NFC Communicator in our complete list of NFC phones.