Samsung has announced two new smartphones in the run up to next week’s Mobile World Congress, and both have optional NFC functionality. 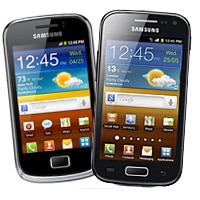 The Samsung Galaxy Ace 2 and the Samsung Galaxy Mini 2 are described by the phone maker as “ideal devices for users with active lifestyles who value individuality and style without compromising on performance or affordability.”

Both handsets run Android 2.3 Gingerbread and incorporate “optional” NFC. There is no word yet on which markets and carriers will get the NFC version, and the only signs that the Mini 2 is NFC enabled are that it will be 0.3mm thicker and just 1.5g heavier than its non-NFC equivalent.