A description of a new NFC service from Nokia which briefly appeared on the Nokia Conversations blog on Friday was “just a ‘humoristic’ test post which went accidentally live for a few moments,” a spokesman for the handset maker has told NFC World. The item was quickly deleted, but not before it was picked up by several tech publications. 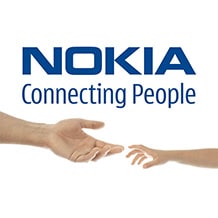 Nokia Hello was described as allowing users to exchange a range of greetings such as ‘Good morning’, ‘Good afternoon’ and even to pass on tea and coffee preferences via NFC.

The blog post went on to say that the project team “estimate that the need for speech interactions with work colleagues could be eliminated entirely by 2015. Excellent news for those working in multilingual environments or who despise their workmates.”

“The average technician currently spends more than two hours daily in verbal exchanges,” one Dr Marcus Redströmm is quoted as saying. “By allowing our handheld devices to take the weight, teams can become more productive, purposeful and reduce noise pollution by up to 85%.

“Unlike computers, human beings tend not to optimise efficient use of time. The fruits of this research will help to correct that. It’s all part of Nokia’s mission of ‘Connecting People’, except in this case the connection is entirely electronic and contains no vestiges of human feeling.”